NYCRuns’ Frozen Penguin holds a special place in my heart as my first 5K. So as soon as it was announced, I signed up for today. I realized I’ve only raced four 5Ks and while I’ll probably also repeat one of the other ones (and maybe the other in April), I don’t love the distance for a race. I wasn’t sure this was going to be as fun as last year since it didn’t have the “first” element, but NYCRuns put on a good event and it was a fun crowd of people bouncing around to keep warm. And as much as I love Central Park, sometimes it’s nice to run elsewhere. 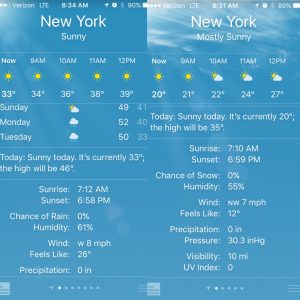 While still penguin friendly, the temps were luckily a bit warmer this year and I learned you really don’t need to be there an hour early. 25m was still plenty despite this run not having advance bib/shirt pickup. 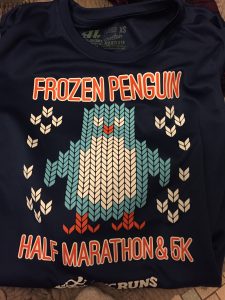 I don’t love the shirt, so I’m not sad they didn’t have the women’s size I wanted. I do like that it’s long sleeved so I can wear it today. Given that I didn’t want to carry it for three miles, I committed the “sin” of wearing it before I earned it. It made for a nice layer as the park was mighty chilly. I’m really glad I grabbed a jacket last minute. 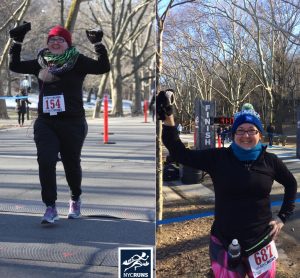 No official photos this year that I’ve found. So just me being requisite silly. Differences between the two photos mostly “lessons learned” in a year of races: 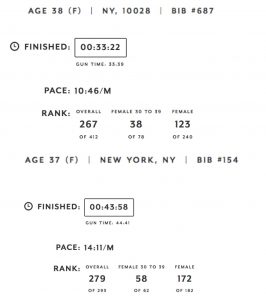 Finished 12 spots closer to the front, but ten and a half minutes faster! And I was much closer to the pack. I ran 99.9% of it, with the walk only in the second water station so I didn’t freeze my chin with ice cold water on a cold day. I didn’t really have a time goal for this one, although I had a few thought starters. I’m happy with the race I ran today though, it was the best possible for me on this day. I’m hoping to get back to Mile High Run Club this week for some speed work, which I know made the difference in recent gains.

I was pleasantly surprised to see how close my watch was to the course markers. I ran 3.13 by the watch, and was in sync until mile 3. Not sure what that was about. Reason I’m using NYCRuns’ timing & distance here vs. usual RunKeeper is last year I didn’t have my watch yet and phone died on course so only had NYCRuns’, so apples to apples ish 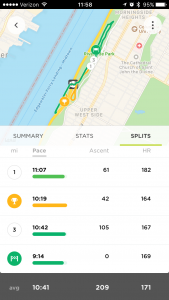 Except when it comes to TomTom splits since NYCRuns’ doesn’t have those. Only timing pad is start/finish. Miles one and three had significant uphills, and the start was crowded/trail segment narrow there so I’m not surprised by any of the splits. Mile two was flat/downhill to the river. Pleased with running the big hills, they’re both steeper than Cat Hill or anything else I do regularly. My knee felt a little weird, so I’ll keep an eye on that. I think it’s fine though, just cold muscle and COLD day.

And then I did something I’ve never done before, I ran after the race. No hot chocolate this year so I got more water and then headed south to the m86 bus. In part because there is no easy/direct way home, but also in part because my legs felt good and I wanted to get a few more miles in. I’m still not sure I’ll ever be that person who does a pile of mileage on top of a race, but this felt good.

As did the hot bath when I got home.

July will probably pick up a couple more, just depends on vacation. But if these all stick, I’ll have my 9 in. EEK!