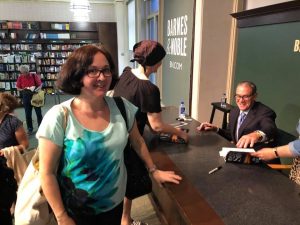 I was actually going to put this on Goodreads, but then I realized how many Daniel Silva books I’ve reviewed here over the various iterations this blog has gone through in 17 (!!) years and realized it has become a bit of a tradition.

Also a tradition, attending his signings here in New York. Silva and his publishers have an annual “break the embargo” event at the Barnes & Noble Union Square on the eve of the official publication date which is why I often read his in hard copy. I missed the one two years ago when I was in Montreal, but I’ve been at most of the others in the last ten years. Also poignant with his release date: I was in Israel ten years ago this week and Silva’s writing, albeit fiction, was a huge part of why Israel was on my bucket list.

[bctt tweet=”My annual visit to the world of Gabriel Allon with #TheNewGirl. Thank you, @DanielSilvaBook for your time & workds” username=”travellingcari”]

In the early books, his quests had to do with history but since the rise of ISIS and given the world in which Allon and his team live and work, it’s impossible to avoid current events.  With the current state of the world (whatever your politics) I’ve made a conscious decision to avoid entertainment that veers too close to news. We have enough bad news in the world that I don’t need/want it in my entertainment. This has meant some skipped shows, but for some reason I just can’t quit the world of Gabriel Allon.

The world of The New Girl parallels closely the news of the last year, specifically the murder of Jamal Khashoggi. In fact, those events caused Silva to throw out the first third of his book in October. It’s amazing to realize he still published the book on his annual schedule. In Allon’s world, Sarah Bancroft served as an art advisor to the imperfect Saudi prince Khalid bin Mohammed . Through Sarah, the prince reaches out to Allon to help him solve the kidnapping of his only daughter. There was a layer of Iran mixed in with all of this, but to be honest I kept forgetting about that plot.

What followed was an intriguing mix of partnership, espionage and waiting. I’ll be honest, I wish it was closer to the real world. I liked how Gabriel saw the prince primarily as a man who was on the verge of losing his son vs. an enemy of the state.  While we as readers have always known that Allon isn’t in it for the money, it was nice to see the true exchange of gifts between KBM and Allon: access to the Western Wall to pray at the Dome of the Rock, a painting of his daughter Reema. Through access to the Western Wall, Silva visited some of his prior books, specifically the one in which Allon found the pillars of Solomon’s Temple, which he used as a cross cultural discussion between Allon and KBM. I particularly loved that KBM’s painting was (questionably) a Leonardo, given my visit to the Met earlier this month to see his St. Jerome on the occasion of the 500th anniversary of Leonardo’s death. I love having easy access to The Met for some art history ahead of each Gabriel Allon book.

While I thought the title referred to KBM’s daughter’s status at school, I subsequently realized it was what Rebecca Manning’s colleagues called her following her defection to Moscow.  Yes, she’s Kim Philby’s daughter, but they don’t yet trust her. For as much as Silva has built up Moscow and the new KGB as a worthy and formidable opponent, I was surprised how easily foiled they were by a rudimentary plot. I actually think this was a disservice to them, but curious how it resolves in future books as I have no doubt they will retaliate.

I’ve finally realized that Silva will never kill Gabriel because there is too much of the character in him, but I’m never confident he won’t harm Chiara. On the one hand, I don’t think Gabriel would survive harm to Chiara or the children, but on the other, Silva loves to torture Gabriel. When Silva released The Other Woman he warned us that she was no risk to Chiara and I took that same advice to heart with The New Girl as well. I did get a little nervous when Gabriel was admiring her beauty

“It was true. Chiara’s was a timeless beauty. In her face Gabriel saw traces of Arabia and North Africa and Spain and all the other lands through which her ancestors had passed before finding themselves behind the locked gates of Venice’s ancient ghetto. Her hair was dark and riotous and streaked with highlights of auburn and chestnut. Her eyes were wide and brown and flecked with gold. No, he thought, no woman would ever come between them. Gabriel only feared that one day Chiara would come to the realization she was far too young and beautiful to be married to a wreck like him.”

Yeah. That did not inspire confidence, Luckily nothing came of it. What did come of it though was learning that they speak to one another in Italian. Or, specifically, that Italian is the language of their marriage. I think that’s an interesting dichotomy as I imagine Hebrew would be their language of operations either in the field or with the rest of the team.

Some of my concerns of the prior books hold true. I miss Rimona, Dina and the rest of Allon’s team. I miss Chiara in the field, although I’m glad she’s safe. I miss his visits with Leah. I was glad to see Eli Lavon, I’m glad we saw more of the children. Chris Keller is still someone I”m enjoying.

Everything is ancient. Fitting in some ways as Allon is — while Shamron is eternal.

As always, a wonderful read and evening. Is it July 2020 yet?