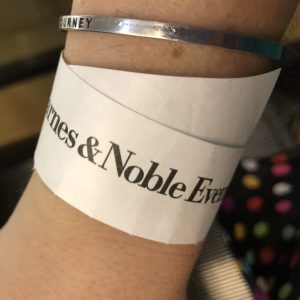 How did I spend Prime Day?

Feeling like a rock star because somehow book signings have become a place that require wristbands. Epitome of nerd cool. Because I knew I had a long train ride to and from  our staff outing on Wednesday, I made the decision not to get Allon for my Kindle and as a consequence I had to wait until I headed down to the Union Square Barnes & Noble to get my grubby hands on a copy 😮 I’m glad I headed down there early as it was more crowded than I expected. 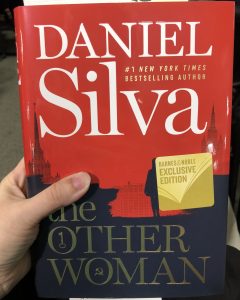 in my grubby hands!

I usually go to both Silva & Linda Fairstein’s book signings at Barnes & Noble (and shamefully, probably the only visits to Barnes & Noble), but I’m pretty sure this is my first “Exclusive Edition” and I can’t honestly say I noticed anything different to prior titles. I quickly started to read and wasn’t too sad when Daniel Silva’s social media person mentioned he was on his way but running late.

After an introduction to the book and its relationship to the current state of affairs, Silva took questions from the audience. This is almost always the first stop on his book tour for each new release and it was a sea of friendly and mostly familiar faces who asked him questions about the series, the book, the eventual movie and more. They then quickly re-set the stage for him to sign the books. I was behind someone in line who brought a few from the backlist. Although I’m not much of a hard cover (or even hard copy) person, there’s something magic about the smell of books. 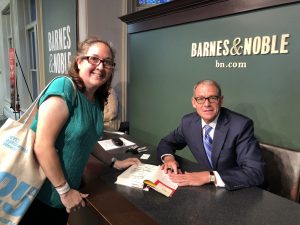 It was soon my turn and I’m still amused that he told me to “say cheese”. The great Gabriel Allon should not say “cheese”.  I thanked him for his time and the creation of Allon and headed home to read.

Here there be spoilers. Dragons maybe, but mostly spoilers.

This is the eighteenth novel in the Gabriel Allon series, and one thing that came out of the Q&A that I’d forgotten was that he didn’t even appear until the fourth Silva book.

It’s book 8 in #20BooksOfSummer (better than I thought!) and it’s also the fifth Daniel Silva book I’ve reviewed here-he’s almost certainly the only fiction author I review outside Goodreads because he’s just so amazing. As for why it’s here when it’s not travel (or lately, running) related? As I mentioned when I reviewed The English Girl, it’s the series that got me to go to Israel for my 30th. Silva brings the world to life.

I’ve been antsy for this book for the last few weeks, especially when I realized it was coming out a week later than normal. Such a ridiculously small thing, but so true. I subsequently finished it in about 48 hours and it would have been much less time had I not locked it in my mailbox each of the past two nights so I could sleep. I’m pretty sure that’s a record for me and Silva

“Don’t cry because it’s over, smile because it happened“

That’s not a Daniel Silva line, but it’s so perfectly applicable to the way I feel about each book in the series. I can’t wait to dive in, but then I know there’s ~360 days until the next. Luckily that usually passes in about August, but it’s still a long year between titles. This title? One of his best despite the too close for comfort state of American/Russian relations.

In rereading my review of The Black Widow, I realize I’ve had the same thoughts about Russia and Chiara for a while now. I loved the scenes at home on Narkiss Street, but I miss spy Chiara. I also really loved the scene with Shamron where they’re talking about a mole who fears Allon is “neglecting your service and your family at a time when both need you desperately”. I hope this doesn’t indicate future discord between Gabriel and Chiara. I feel as if she’s in even more danger now since Rebecca knows her name, but I don’t think Allon will put her in danger.

As soon as I realized there was a Russian angle to this title, I was worried. The Defector is the one and only time I contemplated walking away from this series and would have had he killed Chiara. Russia and Allon are a bad combination, but one that is so compulsively readable. I was pleased to see too late in the book when considering Sasha that Allon remembers that incident at the Dacha 128 miles east of Moscow when Kharkov said Enjoy watching your wide die, Allon … Powerful

Speaking of past books, I was glad to see one of my favorite lines make a cameo early in the book when Allon was in Vienna hoping to take in a Russian defector:

“Snow falls on Vienna while the missiles rain on Tel Aviv.”

Of course it went wrong, everything that can go wrong goes wrong in Vienna.

Although Heathcliff only played a minor role in the overall story, I love how it was a spy that set the dominoes moving. Yes, a spy. I realize in Allon’s world they’re all spies, but Silva’s habit of constantly referring to the KGB/SVR people as “hoods” got irritating to the point of distraction.  A minor quibble in an otherwise excellent book, but I’m pretty sure I never want to hear the word “hood” again. I do wonder what happened with the hood known as Sergei Morosov as I feel as if his story was left unresolved. And Sasha, who is Sasha?

While I wasn’t familiar with the story of Kim Philby or the Cambridge Five prior to reading this, I love how Silva took a piece of history and wove it into his story. It worked so perfectly and made me think of some of his early titles that incorporated the Holocaust and Munich Olympics. Having just read Dan Brown’s Origin, I was glad to see a brief return to Spain to meet the book’s namesake. I like the layer she provided and I found the counted steps fascinating

While I’ve mentioned before that the ISIS titles are too close to home to be truly enjoyable as entertainment, I didn’t feel that way about this one even as Russia & the US in the form of Putin and Trump are doing an unholy dance concurrent with this book’s release. I liked that the plot of this with Rebecca Manning allowed for more of a focus on Graham Seymour than splitting the work with he and Adrian Carter. A nice change. I like that we still had some Keller although he’s faded somewhat into the background.

I’m glad that Gabriel as Chief is still an operative in the field, even if that’s wholly unrealistic. I miss Allon the art restorer and was sad to hear Silva say that while Chief, Allon wouldn’t be doing any of that. I did love when he referred to his past as the prince of fire and angel of vengeance. One thing that really confused me was when they made a brief sojourn to Wormwood Cottage and Parish was pleased to see Gabriel who Silva described as “Five-foot-nothing” I can’t believe he’s that short & actually tweeted Silva’s social media person about it.

And yes, this is absolutely true. Today and always with Allon. 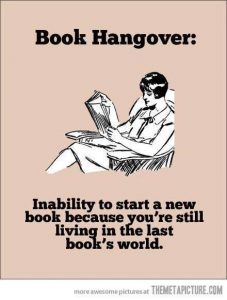 11 thoughts on “Review: Daniel Silva’s The Other Woman”