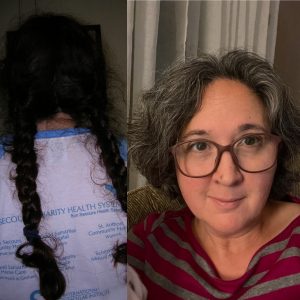 Mom found the pic on the left on her phone, which sort of inspired the one on the right. We’re guessing it was from summer 2007 just before I chopped my hair for Locks of Love, although it was reddish by the time I cut it.  I miss the braids, but can’t fathom growing it out like this again. Also, <3 my new-ish reading glasses.

Speaking of reading, anyone else excited for Book of Magic? I hit two stores trying to find a hard copy on release day as a friend also loves Alice Hoffman, but even Barnes & Noble didn’t have it. Meanies. 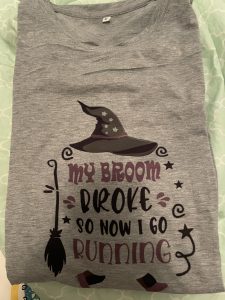 Ever find a shirt and then decide to do a race? That was more or less what happened here. I saw this on a running site, but it’s on back order so asked a friend who is a Cricut wiz, and now I have a shirt for the Haunted Island 10K. I mean could I not run a Halloween race once I had this?

so far the hardest part about re-integrating pre-pandemic life isn’t running – it’s blogging. So glad to have weekend getaways be a thing again, but I appreciate the screen break and don’t tend to bring my laptop so…a Tuesday run down it is. and then I didn’t finish it then either. So have some random run musings while I try to catch up on all of your posts. 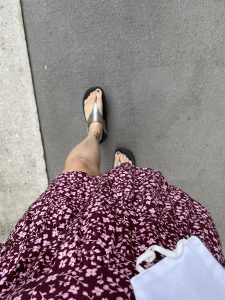 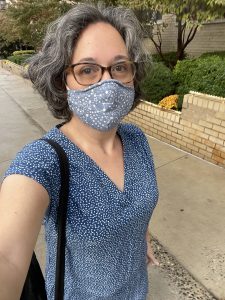 Why yes, I have somehow turned into a dress person.

Despite the flash of summer and overwhelmingly gray skies, running was good. That was part of the struggle I had in finishing this on Tuesday. The runs are the same weekday runs they’ve been since March 2020 and I’ve run out of interesting things to say about them.

I did take my 500th Peloton class, which was awesome even if I couldn’t find a live class. I am so glad I got into that as it really has helped my running over this last year. 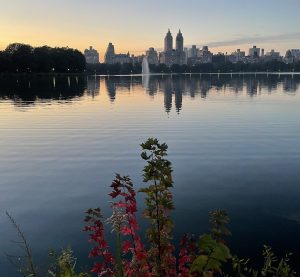 On this day, the sunset wasn’t dramatic, but I loved this splash of fall as I took advantage of the good weather and slightly earlier start to add a mile or two to the office run group. I think that’s why September mileage was so good and while I’m being mindful not to run too much, I like the extra mile or two when doable, especially before it gets too dark too early. 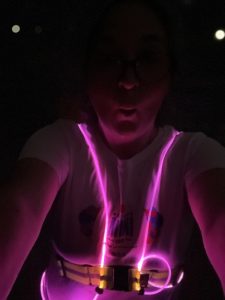 first glow run of the year

Didn’t intend to have a night run, but things happen and I was glad to have my vest although I also should have had my lamp. Since I didn’t, I stayed on the Great Lawn where I knew the pavement was even. Plus, it had castles! 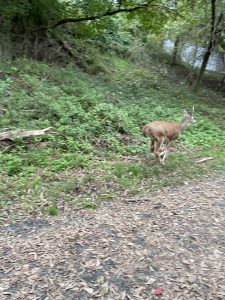 First long run of this two-week window was at mom’s doing more trail running and scouting. I’d seen the Joseph Clarke rail trail when driving in the area, but wasn’t sure if/where it connected to the Erie Path so I went exploring. I realized that the connection point was in “downtown” Sparkill (population 1,500). Yet even as close to the relative busyness of 9W and the Thruway, it had such of a more rural feel. I think part of that was that it’s south of where the bikers typically join the trail. Another ten mile Saturday that felt good. 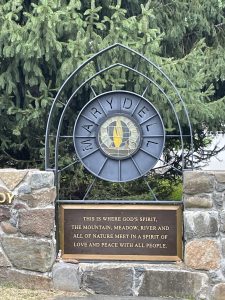 Our office was closed Monday so I stayed up at Mom & Bob’s. I didn’t have a particular route in mind so turned the usual Hook five mile route into a seven ish with a detour to Oak Hill to see Dad. Coming back east toward the hook, I passed Marydell, a former religious retreat now deeded to the Hook. That statement just caught me on Indigenous Peoples’ Day. 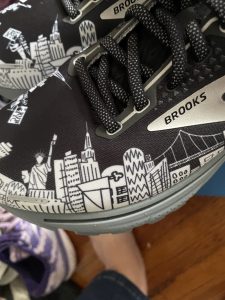 And accidental capture of my beloved tie dye Ghost 13s which are about out of miles. As I said to Kim on her Tuesday post, I didn’t need new Ghosts, especially not 14s, but how could I say no to NYC shoes? Texted a friend the pic and he asked if I was stealth running the marathon again. I had to chuckle because I could see how he’d think that, but no I’m thrilled for my long runs to be 8-10 miles. More on that in a bit.

My knee has long been a barometer of weather, but it really is a good echo of Strava’s shoe mileage tracker. At first I thought I was getting fewer miles out of Brooks then I did out of New Balance, and I remembered the epic personal high in mileage I’m on track for this year. 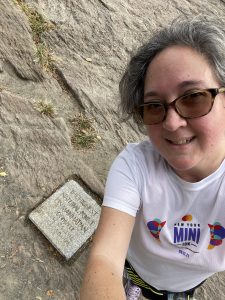 As I said, my training for this half has been meh. I’m getting in the distance but until about two weeks ago really hadn’t sought hills. I didn’t intend to run more than ten miles as a long run, but wasn’t too worried because I was mentally tired at that point, not physically. When I planned to run to the Little Red Lighthouse after a conversation earlier in the week, I realized it would probably be higher mileage, but decided to go for it.

And then I started meandering. A couple blocks from Coogan’s Bluff? ✔ Oh I’m right by Hispanic Society? ✔✔ Oh, I haven’t been to the highest point in Manhattan in about ten years? ✔✔✔ I knew when I finally got to the lighthouse at eight miles (vs. ~ 6 if I’d stuck to my original route) that this was going to turn into a half. After the Bennett Park/Fort Washington detour, I also knew the run was overall going to match Malibu’s elevation, (which mercifully is less than Bermuda was), which is a nice benefit. I adjusted my “exit strategy” from 79th to 86th Street while knowing I could bail at 137 if I needed to. Other than a little calf tightness, it felt good and I pushed through. I wished I had one more chew and was grateful for the operational water fountains, but other than when I ran out of steam on a hill at 12.75, it didn’t feel like the longest I’d run since February 2020.

While I am still thinking about what makes sense as a goal pace for Malibu, it was nice to finish the distance where I’d hoped to be, pace wise. I’m optimistic about the race and the next four weeks. I felt good this morning and a gorgeous five mile walk through Central Park took care of any tightness caused by a lovely two hour dinner last night.