or Women’s Mini, or Mastercard Mini. I’ve run this five! times and I’m pretty sure it has had five names. 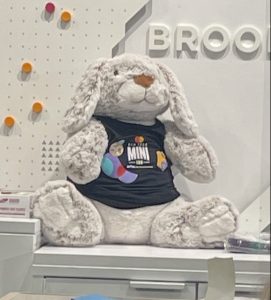 I call him that, but I was already at bib pickup. I’m still crediting him because he’s cute, and I would have bought him if NYRR was selling.

Speaking of ambassadors. Linking up with Coach Debbie Runs, Confessions of a Mother Runner, Mile by Mile, and Runs with Pugs, for the #RunnersRoundup to share my thoughts on 50 years of this race.

I was on the fence about running this race for most of the same reasons as the past: weather, Harlem Hills, NYRR/New Balance complete fail at inclusive sizing, expensive for a 10K. However a friend mentioned she was going to do it, and another friend I was trying to schedule brunch with couldn’t because of the race and I started to think about it. When I saw on Wednesday that the weather was going to be perfect, I just decided to go for it. It helped too that I realized that the new new course did not include the Harlem Hills.

What was really fun about this was how many running friends from different places were running the Mini. In some ways it was more than the Before Times because I never really got the chance to randomly do races with friends I met marathon training, although there were a handful in winter 2019-20. Also in the race Saturday was someone Darlene and I met in Bermuda and a new friend I met in the lead up to the Brooklyn Half. She and I have found one another for Park runs randomly and it’s just so nice even though I’m a happy solo runner.

I also did have a non completely ridiculous reason for deciding to run this race. Between the fiftieth anniversary of Title IX and loving every word of Molly Huddle and Sara Slattery’s book, it’s important to honor the runners who came before and gave us the opportunity to run pretty much wherever, whenever and how long we want. The 50th anniversary of this race was too important to skip for mostly frivolous reasons. It became even more poignant when I subsequently realized that the Mini fell on the 3rd anniversary of Gabe Grunwald’s death. Forever #BraveLikeGabe 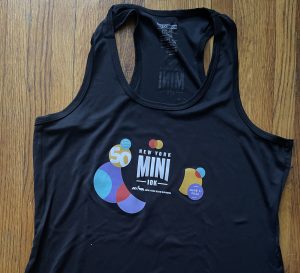 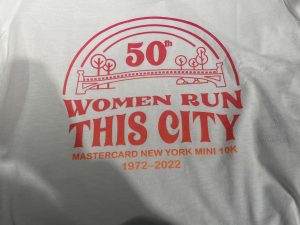 I really wanted this

Aside from having to make an appointment for and mask at bib pickup, this race was pretty much back to normal as far as COVID/NYRR goes. They weren’t checking appointment times, but they were limiting the flow into the space with a short line outside. Honestly, I hope this stays because the layout of the space isn’t conducive to lines and crowds and it just ends up as chaos. The New Balance store was open so the shirt pickup was in the old spot and there was the opportunity for some retail therapy. Race shirts are back to being a tank and New Balance continues to completely fail at inclusive sizing. So it will be donated unless one of you who normally wears a medium wants this.

I was going to buy the 50th anniversary shirt but they didn’t have an XL. I might still if they go on Joe’s New Balance and/or have reduced shipping online because the shirt is fun. / rant 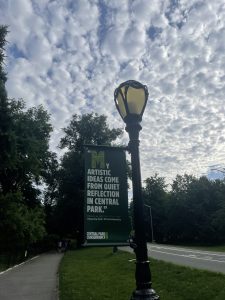 Morning came very early thanks to a weird bout of insomnia from  4-6. I was not pleased about that but also knew it would be fine as I was never going to race this. I had a good vibe as I ran to the start along the south side of the reservoir and passed Deena Kastor who was walking with someone. There were many, many good things about this race but how many former elites always come back is among the best. Yes, I know they’re paid. But it’s still a choice they make. 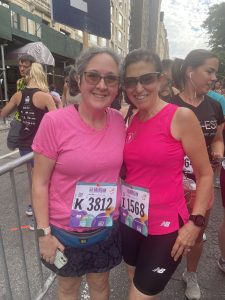 so nice to be saved from a selfie 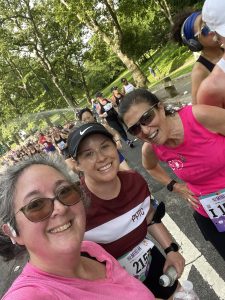 I had just mentioned Mo to Elizabeth, and here she was! 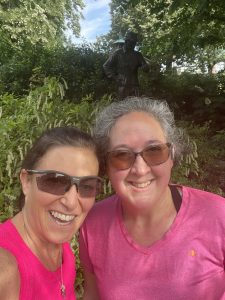 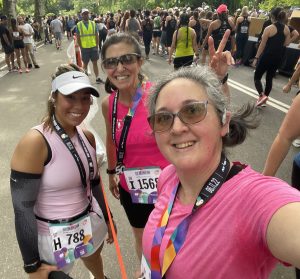 I had four friends running this race and while I was lucky to find two on the course, I was thrilled to find one in the corrals just after we watched the elites go off. We frequently say that about major races, but usually for proud turtles like me, elites are long off the course when I start. For the mini? We were all on the course simultaneously and that was fun. The route into the park meant that lapping wouldn’t be an issue. My start time was called for 8:18. Did I? We’ll see next time as I may finally be able to read my watch on the go. Elizabeth gave me a great lesson in running with progressives mid race and I’ll have to give it a go next time.

I’m not doing a mile split recap because a) I have no idea and b) I don’t recall half the race. Sleep running and running with friends make it all a wonderful blur. Here are some thoughts about the race:

Time? I have no idea. Nor do I care. This race was not about chasing a PR. But with the new route I guess it’s a course PR!  I do remember laughing that Elizabeth and I crossed together yet were three places apart.Funny when net time is so off from finish line time.

Wherever you wind up is where the party’s at. Break out the bottle of Bacardi Black and don’t look back ’cause here’s to the good times, here’s to the sunshine

This is where the race really shined. When I was waiting for Darlene at the finish of one of her spring races, I noted that it felt so wonderfully normal. With it being a gorgeous June day, it was even more so with a true finish line festival at the reopened Naumberg Bandshell.

Many many good things about the #mastercardmini10K but among the best is how @Steph_Rothstein @ShalaneFlanagan @DeenaKastor Viola Cheptoo @PeresJepchirch3 @KenyanScaroni @Em_Sisson and anyone I missed make the time to give back and have fun. Legacy of women’s running is strong. pic.twitter.com/rnDacesfJF 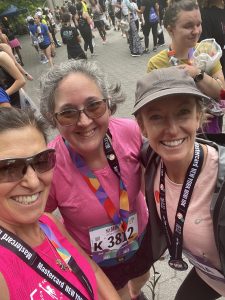 thank you Deena for your time! 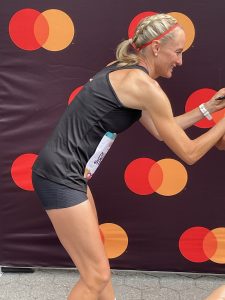 She probably would have happily signed a child if they were presented to her!

There was a meet and greet tent, and another monster line. We saw the monster line was for Shalane (yay!) and opted not to get in it. I love her and she’s probably my favorite elite*, but I wanted to see what else was going on. Heard later they closed the line after 90m. It would have been fun, but I’m fine with my decision.  “What else” included one person ahead of us to talk to Deena, who somehow managed to be incognito despite literally wearing her name.  I’d met her before, but always adore her and what she has to say. She didn’t have to stop, but she did and graciously spent time with us and others who’d spotted her. I’m actually not sure whether she was there in an official capacity or not. 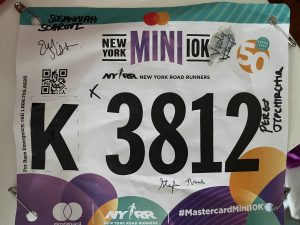 this? This was awesome

Well this is one bib I’ll be hanging on to! The official meet and greet was these athletes, all of whom ran their race and then came to talk, sign and have fun. With their numbers and/or no bibs, they were much more incognito than those out in the open. I’m not usually an autograph person, but it was wonderful to talk with all of them and this is a great race keepsake.  The asterisk next to Shalane? Steph Bruce was an absolute legend making and taking time to truly talk to all who asked her anything. She’d run her fastest ever and finished 12th in a crazy stacked field. So Steph Bruce is my favorite active American elite. I love that with running it’s easier than team sports-you can change loyalties easily.

All in all, it was a fun day to celebrate the legacy of women’s running. Sometimes there’s a race on the calendar, but it’s not about racing – if that makes sense.