or as it was actually called this year, the Mastercard Mini 10K. 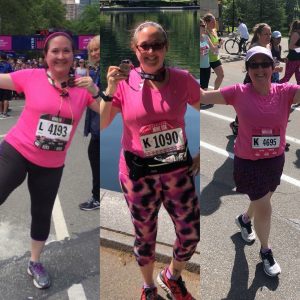 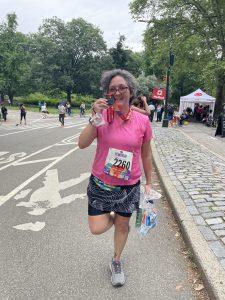 As I mentioned, this is the fourth time I’ve run this race-making it my most-run race along with Frozen Penguin, with Gridiron and Ted Corbitt at three apiece, I think. If you told me this would have become my most-run, I’m not sure I’d have believed you since a) I don’t like summer running and b) I have a love-hate relationship with this race. But 2020 happened and is anything like we would have predicted? Probably not. 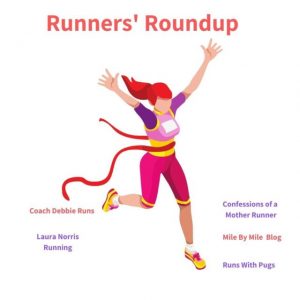 Linking up with Coach Debbie Runs, Confessions of a Mother Runner, Mile by Mile, Runs with Pugs , and Laura Norris Running for the #RunnersRoundup to share my thoughts on my personal “Return to Racing” 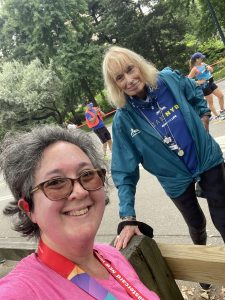 Before I even get into the recap, it was a treat to see Barbara (also in the 2017 finish above). She is at every NYRR finish, including the virtual marathon last November. There was no high five, but we were able to selfie and I blew her a kiss as I crossed the finish. That was more exciting than the race, because it was a little bit of normal. Spoiler: she’s 90 and is a 30+ year volunteer. If she can, we all can.

I don’t know how helpful this is going to be for future runners since NYRR procedures, like all COVID-related guidelines, are changing by the minute. Overall, NYRR’s “Return to Racing” seems to have gone well given the continued races in the series. The Mini was the largest, with Pride and Achilles’ field sizes to grow further. 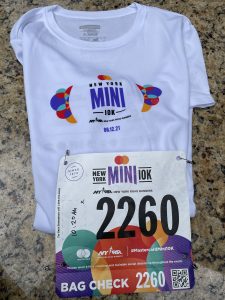 you are not an extra large. New Balance, women’s cut doesn’t mean “mini”

At race registration, you also make an appointment for bib pickup. I paired this with a planned museum visit on Friday. Originally we were meant to get our start times via email, but then they switched to issuing them at bib pickup. Because mine was so late in the week, I also received it via email. It was a 10:20 start -penultimate wave-which is what I expected so slower runners (not a knock, I’m a proud turtle!) didn’t impede faster ones.

While I think white shirts are silly because they never stay white, my major issue was the sizing. I usually don’t care for the summer races since they’re tanks that I give away, but this was a tee and I looked forward to running in it — and then I picked it up. I try not to care about the sizes as much as the fit, but there is no reason to wear a men’s small in race shirts, women’s medium in regular tops and a women’s XL in a race shirt. / Rant. 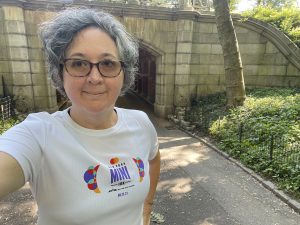 ended up wearing the race shirt Sunday for a walk and talk with a friend. It’s comfy and well fitting so I probably will keep it even though the sizing is bonkers.  Grandma was a seamstress and she always told us to try clothes on since if they ran out of a size tag they’d put whichever they had — so I’m just going to pretend it was a misprint.

I did like how the color palette flowed from the bib to the shirt (and later, the medal). 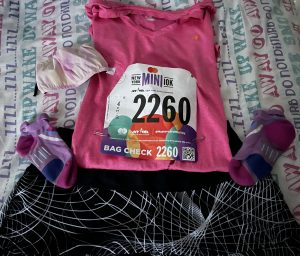 Somehow I even found a pink mask, although I was glad the mask wasn’t required for the actual race because while it was cool, it was humid. I figured the purple socks were allowed since the heels/toes are pink-ish. 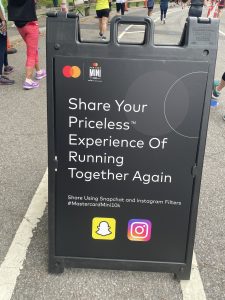 running together is the best

I have no idea what an Instagram filter means in this case, and I don’t use Snap Chat, but this sign made me smile. It was so wonderful to be running with 249 other people in my start. Like most other races, NYRR has gone to an even more staggered start: 250 people starting every 20 minutes. We lined up four across and it felt like recess in the best possible way and every five seconds we heard “and go” as the race announcer sent four of us off.

I actually don’t have any course photos because I had my phone in my belt and wanted to just run. I did miss my favorite weird site: hay bales on Harlem Hill, but I saw them which is all that matters. I wasn’t really looking at my watch other than to see how it aligned with the mile markers since it was my Apple Watch’s first race. It was dead on through 5K and then off by a smidgen from then on, but mostly because I was wiggling some. Overall I was 6.27, so not bad at all.

I didn’t have a race plan other than to have fun. I figured I’d have the first race Zoomies and that when they met Harlem Hill they’d even out. Nope. I was pleasantly surprised to see 11xx on the first mile. If you’re new here since February 2020 and we’re not Strava friends–I’m a proud turtle. I was dead on shocked to see an 11:03 for mile two, which included Harlem Hill. Who am I? Hi, Zoomies and a side of strength training since Harlem Hill didn’t feel as hellacious as I expected. 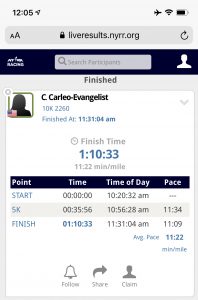 I also know I was getting a little competitive, which is not usual. If they’re running, then I am too. And I kept getting irrationally irritated when a woman who would stop for selfies then passed me. So I found my next gear. The cool temperatures and overcast skies made all that doable as this would not happen in a normal Mini. I was pleasantly surprised that I kept it in the 11s over the Three Sisters which I haven’t run in months and then I turned it on because I could smell the finish. Mile 5 was 11:12, mile 6 was 10:40 and the finish was 9:51. I think that’s likely a little off, but still, thrilled. 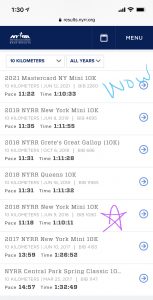 I did not train for this race. I talked about it when I signed up, but then life and my hammy happened, so I had zero expectations. Somehow it was good for my second best NYRR 10K. I somehow can’t find my time for the 2019 Frozen Penguin, so possible this is my second best 10K race. I don’t think I realized the Mini was my 10K PR. If you asked me, I’d have guessed Grete, maybe? 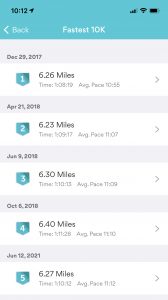 what does Runkeeper have to say?

Pride is a 6K, which will be an automatic PR and after that I don’t have anything on the calendar until fall, but will be interesting to see where my next 10K lands, whenever that is. The hammy was good on the hills and my right knee was only a little twingy. I’ll take it on both counts. Although I ran to the start, I walked home because 7.5 was just fine and the swag bag was heavy: ice packs, Gatorade, Biofreeze patches, water and pretzels. 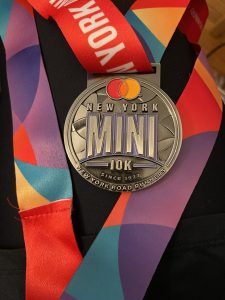 I generally don’t see the point of a medal on a 10K, and love races like Cherry Blossom where they unbundle medals and shirts, but with such a long hiatus from racing it was nice to have this tangible proof of racing being back. I actually didn’t realize until I looked that the medal doesn’t refer to women at all. Interesting given the race’s history.

Curious what this race, and racing in general, looks like in 2022.