Once I knew I had 9+1 taken care of in the event I want to do this crazy thing again, I decided to dial back on racing in 2019. I actually have nothing on the books besides a 18 mile training run in September and the marathon itself.

I will probably do Grete’s Great Gallop, the Albany Half and Ted Corbitt, I just haven’t gotten around to registering due to plans.

Another thing I realized I hadn’t really discussed was how me, Queen of Social Anxiety, was getting on with the run group. To be honest, the only way this was tenable was doing it with on the buddy system. A colleague and I decided to do it together and we both went to our first session (the group’s second) together so we were on even footing. It’s a fairly small group, with summer travel making it even smaller for about 10-15 runners on Wednesdays and less on Saturdays for the group* long run.

It’s a group* long run in name only for me. I knew I couldn’t maintain pace and run the distance so I made peace with it being solo on the Saturdays when the other slower runners aren’t there. Although I’ve enjoyed running with people recently, I still love my solo running for thinking and don’t mind going alone at all. I like the accountability to get up and go on a Saturday and the coach accessibility with any questions. I loved that one of the coaches emailed Sunday after the long run last week to see how I was doing and then we had a bit of an email chat.

The Wednesday runs are the most challenging. I have never done proper speed work other than random treadmill stints so this is where I’m seeing growth. I have the potential for speed even if I can’t maintain it. That’s kind of fun to see.

I can’t do the volume that this training prescribes (nor could I have done Hanson, like you all said), but I’m committed to trying to run four days a week and am OK if the reality is three days. I’m really going to like the Wednesday night workouts for some group work when days get shorter and the park gets darker.  I was also curious for this Wednesday’s time trials as the coaches said we’d then know our paces. And paces is a thing I only sort of know.

So far, I’m really glad I joined. I think I need the group for a first (only?) marathon training. I like someone telling me what to do and I like pushing myself within my limits. Is Rogue for more advanced athletes? I’m not sure. I know elites train with them in Texas, but the current group in NYC is mostly first time marathoners so maybe not.

I’m not doing a countdown to the marathon. I think it will give me too much anxiety. While I didn’t get it together to post for Tuesday Topics, I really enjoyed all of the advice on a strong cycle. So many little things that all add up to a big impact.

This week in nutrition 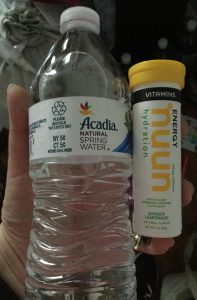 well that was an interesting color! 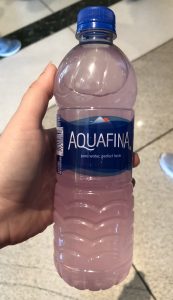 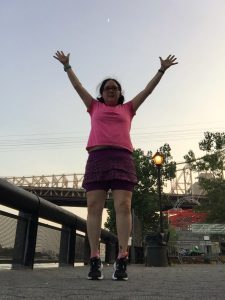 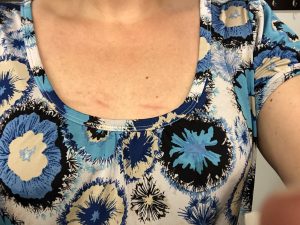 The workout: 2 Mile Time Trial
What? Runners will attempt to run 2 miles as fast as they can with the goal to keep their splits relatively even.  Start at about a pace you can hold for 5K and hopefully pick it up over the final mile.

Why? Doing a 2 mile time trial is one way to determine an athlete’s VO2Max. Basically, this is a fitness test to help determine where everyone is, and the results can help extrapolate the paces that an athlete should be using in training when we assign 5K, 10K, HMGP, and MGP paces as training zones. 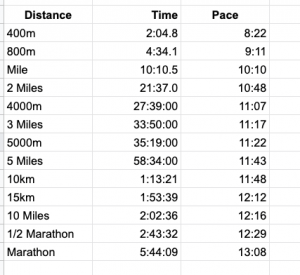 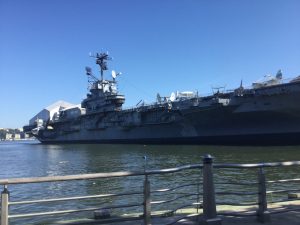 thank you, Intrepid, for the shade

no thank you, splash pad, for being closed 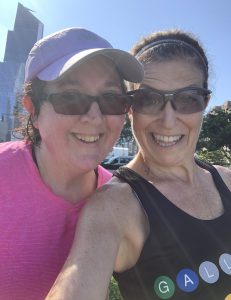 we weren’t running together, but we still found one another on the go 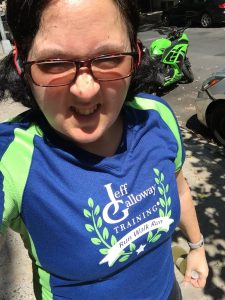 why am I training in summer again? 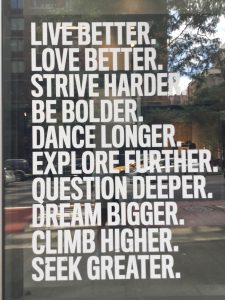 I know it’s an ad. It still resonates with me

Holy crap this got long. I babble in writing as well, apparently!