Have I seriously never posted about the 50 before 50 aka visit all fifty states before I turn 50 challenge? Maybe because as of last year, I didn’t think it was going to happen:

States visited as of July 2014

But 2015 has been very good for my progress:

With this past week’s trip to New Mexico, Arizona and Colorado (amazing! pics to come), I hit the 30 state mark. If it wasn’t totally cheating, I could even count Utah, but I won’t. 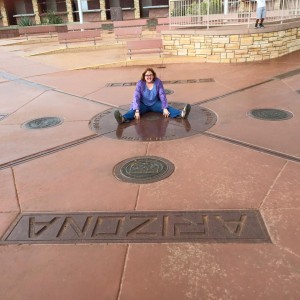 at the Four Corners Monument in September 2015

The craziest thing? If Labor Day were August this year it would have been an insane number of states as between 7/31 and 9/7 I was in:

Repeats in August, but still! Also with my 2015 progress I have:

I don’t think I’ll hit any other states in 2015 so it’s time to think ahead to 2016. I have the National Parks Pass valid through the end of September 2016 so that’s a likely starting point. I could: