Either Flickr’s sale or the last WordPress update broke that plugin, so photos are here. I’m nearly done with my photos, but I still have way too many. The Badlands are almost beyond description though. 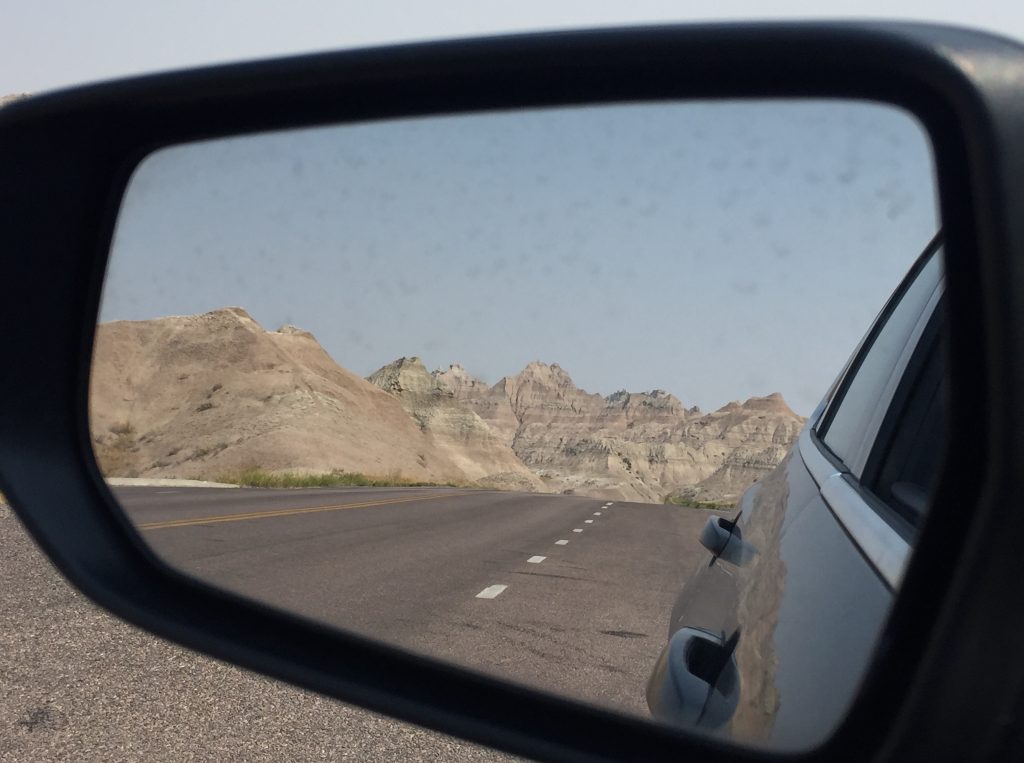 This was one of my shorter drive days and it consisted of Wall, the Badlands and Rapid City and because of that I started later. Wall was a great stop for a mid morning break. It’s pure kitsch and a jackalope explosion, but it was also an oasis on the drive when driving cross state/country was a lot more arduous than it is now. It’s also a reason for a town to be something more than a map dot. I had fun and got some of the only souvenir shopping of this trip done.

From Wall, about an hour east of Rapid City, it was a quick hop into Badlands National Park where once again I found it less crowded than I expected. Like with Spearfish, you found yourselves at the same scenic turn outs and I felt as if I got to know the people who also spent the day touring.

There was a lot of auto touring as this was the point in the trip where it went from warm to hot and I … wasn’t prepared. Sure, I had sunscreen, but no hat and not enough water. So I definitely wasn’t doing any trail hikes. The quick walk out to the “window” was gorgeous though and it all made me realize just how unearthly this landscape was. The Badlands reminded me of Purnululu National Park and the Bungle Bungles and I remember thinking when I was there that we just didn’t have anything like this in the US… because I’d never been to a non-urban area west of the Mississippi! Yeah, I still need to do the Grand Canyon We have the benefit of an understanding of earth science as we visit places like the Badlands, Grand Canyon, Bandelier, etc. I can’t help but think of the reactions of the tribes who called this area home (no wonder they considered it sacred) or first pioneers as they came through and caught sight. Some of the formations look so fragile that you can’t help but think a good rain would wash them away.

Although I was in AC, the heat was starting to zap me so I took an hour break between the main visitor center and adjacent lodge/restaurant to just decompress, take in some wifi and get something to eat. Eating was weird on this trip, I violated some major road trip rules (no chains, eat something local), but sometimes you just need to. This loss of time meant I’d miss Minuteman, but I was never too excited about that. I checked off some Los Alamos/Manhattan project sights while in New Mexico, but it didn’t grab me. And this year? Too much like news. So I had a leisurely wander out of the park, through The Badlands Ranch and back to I-90. Most exciting about the drive back to Rapid City was the approach to Wall from the east and the iconic dinosaur. That entrance makes much more sense as its gateway to the west.

Like the day before when I was chasing the sun to Rushmore, I was chasing it back to Rapid City as I wanted to see some of the president statues and maybe Rapid City’s dinosaurs. It was a quick flyby, but I did both: JFK and sunset through the legs of a cement dinosaur. It was a good way to end the day. Would it have been nice to stay in Rapid City? Sure. But I never had time to see it proper and the suburb rates were just fine for a place to stay. Definitely recommend the Home2Suites chain, and the Box Elder location was lovely.

Was glad to have an early ish night before the long haul back to Cheyenne. Those images are almost done

One thought on “Beautiful Badlands”