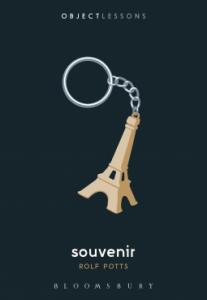 This was a NetGalley title and I was previously unfamiliar with Bloomsbury’s Object Lessons series.

Souvenir completely fit Object Lessons’ profile of being a series that “paints a picture of the world around us, and tells the story of how we got here, one object at a time.”

Besides the cover, what caught my attention was that the author was Rolf Potts, whose work I’m familiar with and have quite enjoyed. Souvenir did not disappoint. In a short, novella-length piece, Potts covered the history or souvenirs from religious relics to “13 tons of contraband Eiffel Tower kitsch!” which were confiscated by Parisian police. The way he looked at things such as a possibly authentic Shakespeare chair in a similar vein to the religious relics – who knew how many sets of a saint’s bones had been found-was fascinating.

I’d recently had a thought about some made in China souvenir I’d picked up and how souvenirs had, in some ways, lost their connection to what they depicted. But as he also addressed, the souvenir might be about the physical object, but it might be about the memory of where the object came from. I personally am more likely to keep the found items type of souvenirs: ticket stubs, museum brochures and the like, but there are items such as a flamenco poster from a 1996 trip to Spain that I remember the exact moment of purchase.

I liked how he traced the history of post cards, once called postal cards. They are, for me, the type of souvenir buying that has changed the most over time. At first, they were cheap and I enjoyed sending them to friends & family back home. Plus the photos they were with were much better than something I could take with a film or early digital camera. Then I wasn’t sending them as often and sometimes felt “I could take a better version of that photo”. Recently with the advent of drone photography, it’s back to “wow, I can’t get that photo”. I don’t always send them, but rather use them as photo memories of a trip. This is also true of items in a museum which maybe didn’t allow photography or the light was too dim to get a good one.

I also really liked how he used his own souvenirs to tell the broader story of what made a souvenir. These ranged from a “seashell” he collected on a trip where he first went to the beach as a child, to a fuse box pilfered from (and later returned to) a plane crash in Colorado as a teen, to theater masks collected while traveling in Asia. This also allowed him to explore the intersection between souvenirs, museum collections and the evolution of museums today, another area of personal interest to me.

All in all, a wonderful, quick read. I look forward to reading more in the Object Lessons series as I think this is a wonderful vehicle for exploring the everyday world.