context, because this former travel blog evolved into a weight loss and running blog over the last decade. I actually thought of reactivating my Tumblr for this instead, but decided this is not a subject which I can stomach trolls on.

Sixteen years ago I was in Prague in January. I didn’t make it to Poland then and deeply regretted not visiting Auschwitz & Birkenau. When I returned to Prague for a summer abroad program in grad school in 2007, Poland was at the top of the weekend sojourn list. That month also included Berlin and Terezin

Much of that blog is lost to a prior crash, but some remains thanks to the Internet Archive:

Some of it will always remain: the raw authenticity of Birkenau, purchasing & reading Night in Krakow while waiting for the train back to Prague.I started this post a week ago but held it until today and in the mean time. I was walking to a meeting on Tuesday and Tim McGraw’s The Book of John came on my iPod:

The Polaroids are just reminders,
You can’t hold life in a three ring binder

In the days before everything had to be photographed “just right” for social media, it was a lot easier to be present. I knew I had this photo and went looking for it, but I didn’t need it to remember the moment.

The original caption on that photo, when uploaded to Facebook several years later:

“It’s wrong to say I loved it, but this trip moved me in so many ways. By far the most powerful view at Birkenau. I could see and feel the ghosts, especially after reading Night.”

Like Pearl Harbor, Hiroshima & Nagasaki, I believe Auschwitz is a place that everyone should visit. It is the best way to learn from history. I didn’t do the Berlin Holocaust Memorial as I just couldn’t, but finally made it to DC’s in 2014 and visited Yad Vashem in 2009.

On Thursday morning, May 2, a colleague and I attended the preview of Auschwitz. Not Long Ago. Not Far Away, the largest Holocaust exhibit in the US and:

“the first exhibition to feature major loans of artifacts from the former Nazi concentration camp in occupied Poland, is currently on display in Madrid and has drawn some 600,000 visitors. It will open in New York on May 8 — the date of the Nazi surrender in 1945.”  ~ The Horrors of Auschwitz at a Museum in New York, New York Times.

This exhibit builds in some ways on the museum’s 2014 exhibit, A Town Known as Auschwitz, and, as noted in a review (English) of the Spanish exhibit, seeks to spread Auschwitz’ history to a larger audience.

Auschwitz was more than a death camp, but its German name has become synonymous with hate, fear and death. The exhibit opens today, May 8th, the anniversary of the Nazi surrender. The date that haunted me through the exhibit was that April 30 – the day of Hitler’s suicide – was just a few days before my visit.

They recommended 90m to walk through the exhibit and somehow that wasn’t quite enough. Some of the items on view were expected in terms of what is often found at a Holocaust exhibit or museum: shoes, glasses. luggage left behind by those who were no longer there to use them. The luggage hit me hardest-so many packed as if they would for a short holiday. Seeing the German rail car out front of the museum just brought that home and hard.

I took a few photos, but mostly just took in the information. There is a lot to read and a lot was new to me even as someone who studied the Holocaust. The simplicity of it is what lingers with me a week later. 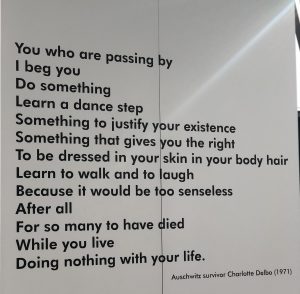 12 thoughts on “Auschwitz: Not Long Ago. Not Far Away”