For this week’s Tuesday Topics, I’m linking up with Kim and Zenaida to share a race recap and book review.

I was given a copy of this book to read via NetGalley. All opinions are my own.

While Matt Fitzgerald is a name I’ve seen in perusing running titles, this is the first one of his books I’ve read. The title piqued my curiosity when I saw it on NetGalley and decided to give it a whirl. That it took me a week+ to read isn’t indicative of its quality, I just had minimal reading time with friends in town.

This book begins with Fitzgerald quitting on a high school race out of stage fright and ends some 20+ years later with his eighth marathon in eight weeks. The latter encompassed a road trip that took him from California to Oregon via Scranton, Boston, Toledo and beyond. What a journey. This book isn’t just a chronological look at his running career or a travelog, but rather the eight marathons are interspersed with his autobiography.

Fitzgerald’s roadtrip companions are his dog Queenie and his wife Nataki. Both figure prominently in his life history, in fact one night he almost squashed Queenie when attempting a return to his apartment after fleeing it when fleeing from one of Nataki’s psychotic breaks. To say the three of them have had an eventful life is an understatement, but this book isn’t a tale of woe so much as the tale of the author’s growth as a man, runner and husband. My one quibble with the book is that the chronology wasn’t always clear, making it challenging to determine whether a particular race had a goal time, or just a goal of finishing.

As he traveled the country to run his eight marathons he met up with local runners – either for a shakeout run or at the races themselves. In some cases these were planned and in others they came about as he was approached while walking into a port-a-potty. One of those he met up with is Lisa from Tech Chick Adventures who I’ve come to “know” through the Weekly Run Down and its predecessor, the Weekly Wrap. I look forward to her review of the book.

All in all, a wonderfully written account of a difficult journey.  I would definitely recommend it to most runners. If you have personal experience with bipolar disorder, you might find some sections to be somewhat triggering. I think Fitzgerald portrays his & Nataki’s journey to live with her diagnosis very well. 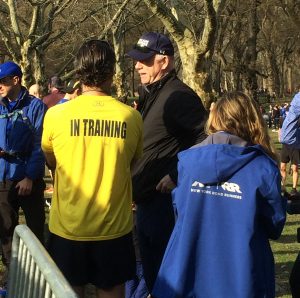 Movement is a privilege. That’s something my colleague often says when we go for a run, and it’s so true. It’s also something I fought to keep in mind during Sunday’s #RunToBreathe -one of NYRR’s regular four milers which doubles as a fundraiser for Team Boomer, Boomer Esiason’s foundation that raises money in honor of his son with Cystic Fibrosis.

9AM start was nice, and I jogged to the start. It was so liberating not to need all the layers! I wore capris but would have been fine in shorts most likely. Who AM I?!? It was a staggered start and Corral K crossed the start about 11:30 minutes after the front runners. They said this race had about 5,000 runners. It felt like everyone wanted to come out and play in support of a good cause.

I didn’t have a race plan. I didn’t really have a goal. I just ran by feel and walked the water stations as they’re too crowded not to. I tossed my long sleeved shirt at the top of Cat Hill. My Achilles was perfect. My hip was chirpy, but not to the point where it impacted me during or after, although I opted to walk rather than run home. Mile one into two, I wanted to peel off and walk home for no good reason other than I wasn’t feeling it. Then I got into a rhythm and three, four seemed to go quickly. As much as I enjoyed 5-7 mile runs, the first two are always mental torture.

As was the case with the Bronx, some distance helped with my look at this race.  The issues:

The results weren’t terrible, but they weren’t good. When compared to other 4 milers, it’s better than 2019 Gridiron when I was more broken and 2018 Achilles when I was sick. Oh and much better than my inaugural #RunToBreathe. I realized early on that my legs were tired and decided to focus on the fact that I was healthy & able to run this race while  that isn’t the case for others.

On to the next. And yes, movement is indeed a privilege.

26 thoughts on “Review and a Race Recap: Matt Fitzgerald, Life is a Marathon”