Running is cheap. You just need to get out the door and go. Hahahaha.

It’s a cliché we see everywhere. But before I get there, nod to why & how much I love the various link ups & the community here. Quickest ever crowd sourcing and I’m going back to modified Higdon. Thank you!

As I renewed my Runkeeper subscription thanks to the periodic discount on Runkeeper Go, I began to think about the sheer amount of technology running “requires”.

Of course none of it is actually required, save for the websites, we can just lace up and go. But it’s a funny digital version of scope creep.

I don’t actually love Runkeeper. The distance traveled is way off from Garmin & Strava, though sometimes in my favor. But it’s worth the $19.99/year for the custom training plans since I know I’m going to have to modify Higdon/Hanson for my NYC training. In fact, inputting that was literally the first thing I did Monday when I upgraded the account.

You know when technology would come in really handy? If I’d scroll down my spreadsheet earlier than April 30 to realize what mileage I needed. Tuesday was a surprise six miles so it might not have actually mattered otherwise, but finishing the month with 59.16 miles. No issue with 59, it’s the most on the year but oh so close to sixty which just sounds like so much more.

On the non-technology front, I love this hat. I’ve worn it a fair bit lately including Saturday’s afternoon race with my “not quite long enough for a ponytail” hair.

On a pseudo technology front, since I’m reading it on my Kindle, loving Tommy Tomlinson’s The Elephant in the Room. So different to see a weight loss memoir from a man’s point of view.

Weekly Run Down with Deborah and Kim: 18 miles. My most in a while. Operation building back up is good. Light on photos as I didn’t run with my phone or iPod on either Tuesday or Thursday. 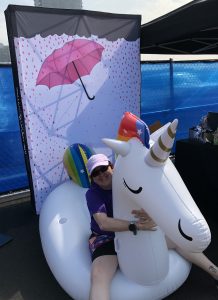 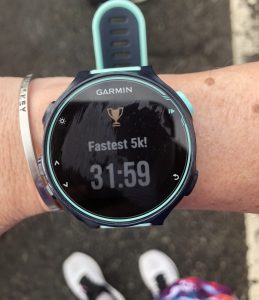 cloudy with a chance of maybe?

So close to so many round numbers it’s almost comical. Happy with that month. Good balance of true rest days and some solid ones.