I runfess that I have not figured out how to blog from my phone, so this is a two-week Wrap since I spent the interim weekend driving with mom down to Florida. I had the best laid plans of crashing a post quickly on Monday, but I got home late and yeah, not going to happen

I don’t have email on my phone, so trying hard to play catch up on what I missed in Runfessions, Tuesday Topics, Coffee Date and Weekly Wrap. But disconnecting can be wonderful. I didn’t post too much while we drove, but it was great to finally see Richmond even though the museum we wanted to visit was closed.

Not having email on my personal phone was a decision I made when I got the new phone in March and I don’t regret it at all. Really what personal email isn’t spam these days? Does anyone still use email as a primary means of communication outside of work? That’s crazy to think of, but we’ve swung back from give me your number to give me your email to give me your number to text. I just finished Isabel Gillies’ A Year and Six Seconds (loved it!) and one point she made when a friend offered to set her up on a date post-divorce was that there was no email when she dated her first husband. Crazy! 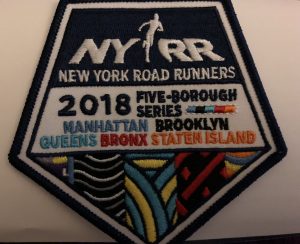 I had no idea there was a Five Boroughs series patch. So cool. Used to love collecting these when I was backpacking. Want to think of somewhere more exciting to put this than my corkboard. It’s tempting me to do 4/6 again, but I really don’t think it’s on tap for this year since I’m out of town for Brooklyn and not sure I want to do Queens again. We’ll see.

I actually eased way off on running after the Half as I said I would to try and get Achilles/calf resolved. I really don’t want it to linger. Luckily this seems to be helping although I was worried about my back to back races which I scheduled before this flared. All the cross training this last month reminded me that I miss rowing, and do like the Lateral, which were both pleasant surprises.

what was that old Doublemint ad? Double the fun? Weekly wrap with Wendy and Holly Amy: 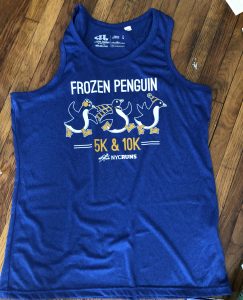 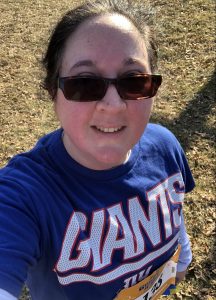 Behind, but smartly letting ankle heal vs. pushing. I’m OK with this

Gym visits: 14 in January (so much stretching, cross training), 52 for September-February cycle. Wow, I don’t miss having to sweat out 50. Time to file for reimbursement.

35 thoughts on “from Fred Lebow to Penguins and Football”