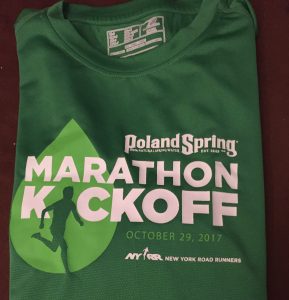 When we were running the Squirrel Stampede, I commented to Beth that one of the runners in front of us had a race shirt that looked different in color to mine. It was only then that I realized the women’s shirts were more of a pink than the red of the men’s shirt I selected. And I love pink.

Women’s shirt sizing drives me bananas. It’s partially that I don’t want to get a larger size, but partially because I don’t like the cut. The only race shirt I’ve never worn is the singlet from the Women’s mini because I don’t like running in singlets (chafing, not batwings) and because the largest size they had didn’t fit right. I’m lucky in that many NYRR shirts are t-shirts and I began to think that I should get over my hangups with women’s sizing because I like and want to run in some of these shirts and men’s small are sometimes too big 😮

When I went to pickup my bib and shirt for Sunday’s 5 miler I realized a desire to keep it wasn’t going to be an issue. I really do not love this shirt.  Just not a fan of green (although I realize it’s a Poland Spring color) and blue seems to be a better choice for the water drop. It seems a missed opportunity for some Halloween fun. I wasn’t going to run in it anyway as I have an adorable Halloween shirt from Gone For a Run that I’d already planned to wear even if I liked the race shirt (I’m Team Don’t Wear it Until You’ve Earned it (although the sea of coral in the Retro 5 Miler was awesome)).

I’d say I’m not even going to keep it (I’m still on a pretty big Spark Joy kick), but I probably will. My shirt from the Run to Breathe was white and hasn’t washed/worn well. It’s also too large as I was a medium then. So we’ll see if I like this enough to keep it in rotation.

After bib/shirt pickup it was too gross to run outside so I headed across town to the gym. I have to say, the choice of Blink was perfect. If I find myself somewhat short on steps I’ll head to the one at 54th & 2nd which has the dual benefit of giving me a walking warmup. If the weather is bad or I’m short on time, I’ll hop on the train two stops from the office. I love that both have rowers and today was the first time I ever had to wait for a machine. Hi August in October. 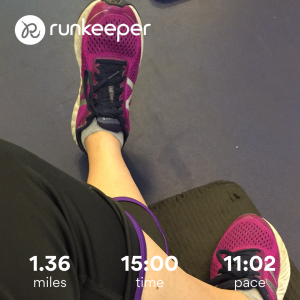 Today was supposed to be a 4×400 interval day, but I realized in warmup that I really didn’t have enough in the tank for intervals so I treated the 2×400 and warmup as a warmup in its entirety and then went upstairs to the rower. If I can get enough steps in tomorrow, it may be an off day. I ran 5 miles on Saturday (as I thought, Run Less’ starting point was too much for me), 1.95 on Sunday to the gym where I stretched, rowed 3K yesterday and had my combo today. I need a day so I can run Thursday and then be ready for Sunday. We’ll see.

I’ve been doing 3K rows of late but was disappointed to learn those can’t be ranked/verified. I wasn’t sure if the PM5 at the 54th St. location would auto log a non standard length workout either so I decided to drop down to 2K tonight since I don’t often run & row together. 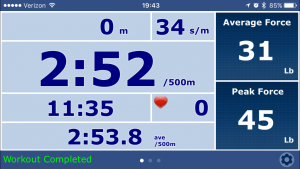 I have to say, the autolog is a thing of beauty. Way better than photos of the displays and button mashing to get the verification code, although Bryant Park only has the old models so this is an east side thing of luxury. Lots of numbers, although I’m too far removed from regular rowing for those to be meaningful. I’m really loving this as a cross training and have all but given up the bike and look forward to seeing how these numbers progress. And yes, rowing gives me Fitbit “steps” but I miss the bike’s reading time.

Speaking of reading, started Becky Wade’s Run the World over the weekend and I’m really loving it. Although it’s a great exploration of running communities and their habits (she and I are currently in Switzerland), the travel bug in me loves it for the destinations she’s exploring. Review TK.