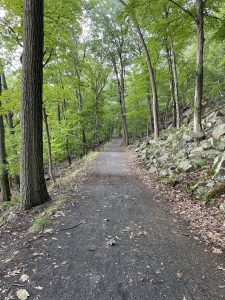 humans are not meant to live on concrete

While this started out as a purely Labor Day post, I finished one of the trails on a subsequent weekend, so this could also be fall trail running. Linking up with  Coach Debbie Runs, Confessions of a Mother Runner, Mile by Mile, Runs with Pugs, and Laura Norris Running for the #RunnersRoundup to share my thoughts on exploring the Hudson Valley.

Like many of you, my Labor Day Weekend plans were constantly in flux. First Delta, then Ida. After not having gone anywhere since 2018 due to marathon training in 2019 and then yeah, well, 2020, I really wanted to go somewhere. This wasn’t going to be New Mexico, or Devil’s Tower and the Badlands of South Dakota or a walk through Lakota history, but I wanted to have some fun after a long summer and ahead of a busy fall.

Luckily I had nothing booked and was borrowing a car, so I wasn’t out any money when Ida knocked out Metro North and my ability to get to the borrowed car until Friday. Even with a shortened window, I still wanted to get away so I spent Thursday evening researching relatively close options. I knew I wanted somewhere that I could run long-ish on Saturday, and wanted to be outdoors in a non-urban area, but beyond that it was a blank slate. Outdoors was a big piece even before Ida — while I’m comfortable staying in a hotel, I didn’t want to be indoors so I was looking at what we used to call motels and even a quick look at some air BNBs/glamping sights. (Cari doesn’t camp in tents. Or anywhere with outhouses!)

I eventually stumbled on Hudson Valley Magazine‘s guide to the rail trails, and it was like a light bulb went off. Darlene is always talking about rail trails and I had been thinking about the Walkway over the Hudson since Judy posted about it. I got very excited about the idea of a rail trail loop and a Hudson River sunrise. Alas, many other people had the same idea-and New Paltz is always a destination-and there weren’t (m)any hotel rooms to be found. I noodled around the page and was caught by the image of the Rosendale Trestle on the Wallkill Valley trail and my decision was made. 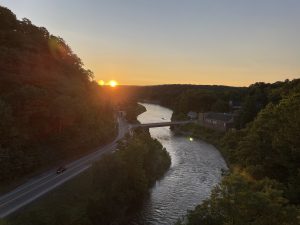 Luckily, Kingston-a larger city and one that didn’t have college move in that weekend- had many more hotel options and was a quick ~ hour and a half drive (with long weekend traffic) from Nyack where I picked up the car. There’s a cute downtown on Rondout Creek and a maritime museum, although I didn’t have time (or parking) to do either so it was an early night in at the hotel.

In the morning, there were two possible parking spots since I had no interest in doing the sixteen miles to and from Rosendale: Kingston and Rosendale itself. I decided on the latter since I wasn’t sure if I wanted to do even 12.5 and it was an excellent decision as Binnewater Kiln lot was quick drive and easy access to the trail. 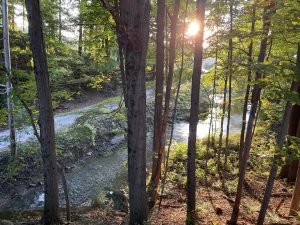 just south of the Rosendale Trestle 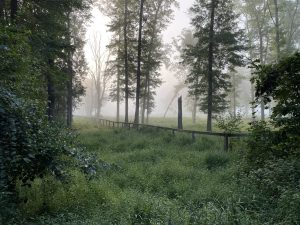 eastern mist. The sound of roosters was amazing 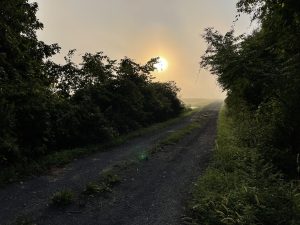 the sun trying to do its thing 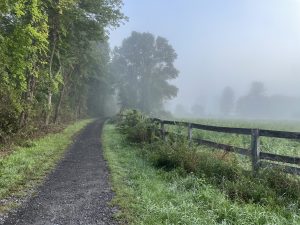 running back north and into the mist

The run was almost flat and while there weren’t many things to see, this city mouse loved running to the sound of roosters. There were some squishy spots thanks to Ida’s flooding and Giant’s Ledges was inaccessible without waders. That’s on my list for next time as I do want to explore the ‘Gunks and get back to Ice Caves Mountain, which I haven’t done since I was a kid. Would I recommend this? Absolutely. The trail itself is ~ 22 miles and with multiple hotel and parking options, you can design a run of any length. I ran about five miles south toward New Paltz before turning back and next time would run north, or maybe even run from Kingston to Rosendale itself. No bathrooms or water fountains, but there is a trailside cafe on weekends.

Would I recommend this? Absolutely. There are also some camping and AirBnB options closer to Rosendale, but the drive from Kingston was fine.

After the run it was time for a wonderful recovery meal. I met my brother and his kids for ice cream at Con-E-Island in Catskill, which had lovely creek-side “dining” Let’s just say the three year old wasn’t the only one with chocolate face when we were done. 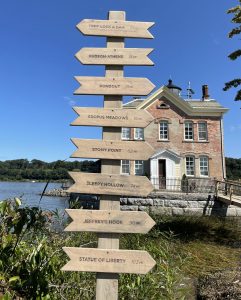 Saugerties Light, and the lighthouses of the Hudson Valley 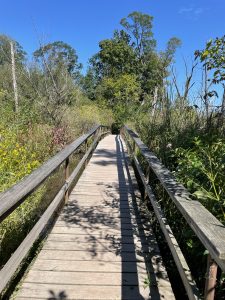 boardwalk “hike” out to the lighthouse

I still had no plans for the rest of the weekend but decided to head south-ish on 9W. It had been a long time since I meandered the Hudson Valley and I had zero interest in the Thruway on which you go through too many places and see nothing. I am obsessed with historical markers and scenic lookouts, so when I saw a turnoff for Saugerties lighthouse, there was a quick left and a meander.

I wouldn’t call this a hike, but if you’re looking for a nice way to stretch your legs, this and the slightly further south Esopus Creek are a good spot to get out of the car and walk about half a mile out to the Light, which is now a BnB on weekends. 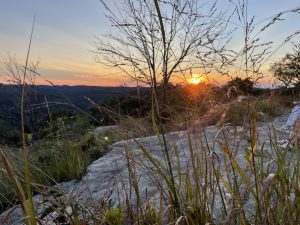 9W and Seven Lakes Drive (also a hike option) made for a fun way home, and I have many more sights to explore the next time I have a car. 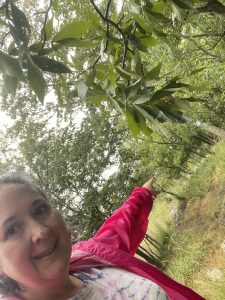 With my base moved south for the rest of the weekend, I had the opportunity to explore Hook Mountain – a childhood favorite. I’d read there was a new trail so on Sunday I set out to find it. Unfortunately, the staff at the booth didn’t know about the new trail and I couldn’t find it from the other trailhead at Rockland Lake so I did what I did many weeks in high school, park at 9W and go to the summit that way. 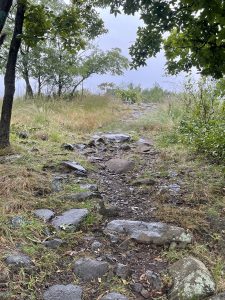 Fun fact, there’s cactus on the summit! There unfortunately wasn’t much of a view due to the low hanging clouds, but it’s always fun to be up there. Hook Mountain is barely more than a hill, but there’s something about those childhood places and spaces. It’s possible to go from the summit down to the river path via a couple of routes, but I wanted to save that for Monday’s run.

Oh Monday’s run. I knew the path heading north from Nyack Beach State Park (aka Hook Mountain) was either 1.5 or 5.8 miles, or maybe something different entirely! I had a feeling it was around 5 miles each way based on the modified course for the 2021 Hook Mountain Half, a route I accidentally ended up doing the second time I took this trail. 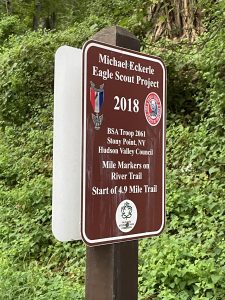 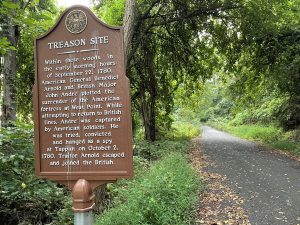 so excited to finally find this

Turns out it’s 4.9 miles from end to end and part of the Hudson River Greenway Trail from Nyack Beach State Park to Riverside Avenue in Haverstraw. Treason Rock, even if not exactly on the historical spot and inaccessible at high tide, is still fun especially so close to the anniversary. 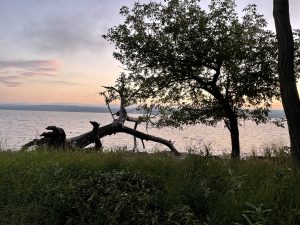 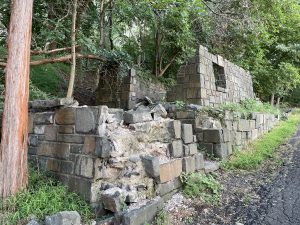 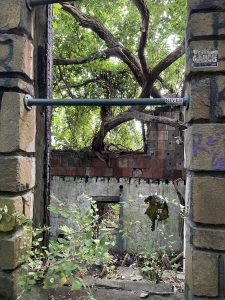 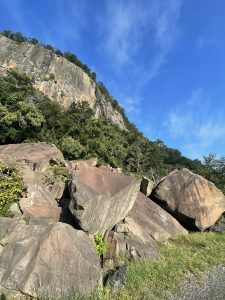 As you can tell, this is a wonderfully scenic route. The ruins of the quarry work  and the Knickerbocker Ice Company are fascinating. The first time I ran it, I did a seven mile out and back from the Hook Mountain end. I had just done ten on the Wallkill trail two days before and didn’t want to do two long runs in three days. The second time, the Hook Mountain parking lot was closed so I went back to Rockland Lake and parked at the trailhead by the firehouse. The upside? A half mile descent to start and closer to the Haverstraw end? The down side? A half mile ascent at ~ 15K. Spoiler: I walked. Both routes were fun, and I wouldn’t say one was necessarily better than the other since absent that half mile spur, they cover the same terrain whether you start at the Hook or Rockland Lake (Landing Road is the trailhead, use Knickerbocker Ladder Company on Google Maps). Can’t wait to see it in other seasons, especially as the leaves change. And if I ever get motivated to do a LONG run, it’s ~ fifteen miles there and back from Mom’s, but driving the first leg will always win out if I have car access.

On Sunday, I thought absolutely no way ever to the Hook Mountain Half, by the second Saturday that I ran it? Maaybe? Especially if they go back to the original course? This isn’t trail in the full sense, but it could be a nice non-road option.

During the ten day window I was back in the city, my knees were not happy to be running on cement. I was missing the fresh air. I will always be a city mouse, but I do love my escapes. Especially on the trails. I run trails whenever possible at Mom’s and look forward to exploring more of the Hudson Valley.